Ford is definitely investing in Detroit real estate in 2018.

When people around the world think of Detroit, the first thing that typically comes to mind is: cars. It is after all, the Motor City. Long home to the "Big 3," titans of the automotive industry: Ford, General Motors and Chrysler. It's fitting that one of those giants has just announced one of the most important developments in Detroit in over 20 years. Ford has acquired and will renovate the iconic Michigan Central Station. A grand, historic structure that dates back to Detroit's time as the manufacturing capital… Ford Unveils Plans to Renovate Iconic Detroit Building

Just a few years ago, there wasn't even one major supermarket brand within the city limits of Detroit. Now, with a major overhaul of Detroit's Lafayette Park underway, Detroit will be home to 3 Meijer supermarkets. Meijer, a regional supermarket giant, took a risk on the city when it opened their first store on the corner of Woodward and Eight Mile. Following the success of that store the company soon opened a store on McNichols and Grand River, on the city's northwest side. While it may seem like a small step, Meijer's move to Detroit signaled a shift in how larger retailers and national brands… Detroit Lafayette Park Getting Major Overhaul - 5 New Developments Slated

The inaugural Michigan-China week kicked off earlier this month in Detroit's historic Book Cadillac Hotel. According the Detroit Free Press, business leaders and elected officials across the state of Michigan are making an effort to strengthen the state's relationship with China. The aim is to attract new investment from Chinese businesses and individuals that will create jobs. As part of the week long event, more than 150 business and government officials from China visited… Detroit Mayor Leading Effort To Attract Chinese Investment

The City of Detroit is continuing its aggressive neighborhood stabilization plan with help from the private sector. The city announced its plans to raise $130M, with a focus on commercial corridors and its parks system. These are two areas which are desperately in need of funding. Even in some of Detroit's best neighborhoods the commercial corridors are lacking the national retailers found in nearby suburbs. A good example of this can be found on the Northwest side of the city, along West Seven Mile Rd between Southfield Freeway and Woodward Avenue. This area is generally densely populated compared… Detroit Plans to Invest $130M in 7 Neighborhoods

The City of Detroit’s effort to raise $9M to invest in skilled trades just got a major push. The City is making a concerted effort to improve its public school system and expand programs that offer jobs training for adults. City officials led by Mayor Mike Duggan have turned to Detroit’s business community to help raise funds for these programs. Dan Gilbert, head of Quicken Loans and Bedrock Real Estate, announced that his companies will be committing $1M to the skilled trades program.

Quicken Loans, based in downtown Detroit, is now the largest mortgage originator in the country. And… Detroit Raises $9M to Invest in Skilled Trades 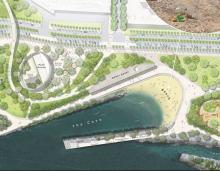 This week the Detroit Riverfront Conservancy announced that a New York based firm will get the nod to redesign the West Riverfront Park. The 22 acre park will be redeveloped as part of a $55M project according to MLive.

Michael Van Valkenburgh Associates was the firm chosen as part of an international contest to choose the best design. Detroit Mayor Mike Duggan welcomed the news, and reminded us that just ten years ago the Riverfront was lined with “parking lots and cement silos.” In a statement… Detroit Riverfront Park to get $55M Facelift

For the first time in seventeen years, the City of Detroit announced average home values have increased city wide. This is significant news and is another indicator of Detroit's resurgence. While many pockets of the city have witnessed double digit gains in property values since the recession, these gains haven't been felt city-wide. According to WXYZ Detroit, values have increased by 6% overall for the entire city. In some neighborhoods like Cornerstone Village, the increase has been even … Average Housing Values Increase City-Wide in Detroit

The Detroit real estate market has become the most popular investment market in the country. Investors and small companies from all over the world have flocked to Detroit in recent years to cash in on the high returns. As of late, larger institutions have entered the market in a big way. In February 2018, the University of Michigan Board of Regents announced a $30Mil investment in a Detroit real estate investment fund. This is major news considering any investment by the University must be thoroughly researched and voted on. The Detroit Renaissance Real Estate Fund invests in residential properties… University of Michigan Annouces $30M Investment in Detroit Real Estate