Why Invest in Detroit Real Estate 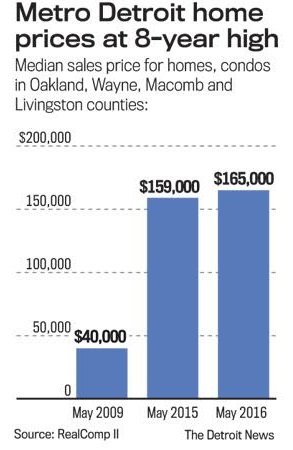 Investors from around the world have invested tens of millions of dollars into Detroit’s neighborhoods over the past 7 years. This helped drive the housing market forward while lending restrictions pushed many home buyers out of the market. Gradually, as the national housing market continued its upward swing, more home buyers re-entered the market and helped home values surge. No market felt this surge more than Metro Detroit, where prices are up almost 70% from its lowest point in 2010.

The good news is that investors haven’t missed the boat. The housing market is expected to continue its climb, and working with US Investor Group's Detroit real estate investments team will ensure you get access to exclusive deals which are significantly under market value.

Since the economic downturn of the late 2000’s, Metro Detroit has experienced a total resurgence of its economy, fueled by traditional industry as well as new businesses. Metro Detroit’s economy will forever be linked to the Automotive industry, home to America’s three largest automakers: General Motors, Ford, and Chrysler. During the height of the global financial crisis, Detroit’s “Big 3” automakers were on the brink of collapse, culminating in a bailout by the US government. General Motors, the largest automaker in the world filed for bankruptcy and received federal dollars during its restructuring. Since then, the company has far exceeded the expectations of market experts, becoming one of the most profitable companies in the world. Since its low point in 2009, the company has earned over $30 billion, punctuated by a record $9.7B profit in 2015. Ford Motor Company, the country’s second largest automaker and one of the largest employers in Metro Detroit has also performed well, earning over $8.5 billion in 2015 alone. In January 2017 Ford announced it would be scrapping plans to build a billion dollar plant in Mexico, choosing instead to reinvest in its Michigan plants and keeping jobs in Metro Detroit. By shifting their focus to new product development and innovation, GM, Ford, and Chrysler have all made positive gains which will have a reverberating effect throughout the region.

While Detroit will always be linked with the manufacturing sector, the City’s economy is diversifying into other industries. The healthcare industry employs tens of thousands of Detroiters and is home to some of the largest companies in the field. Blue Cross Blue Shield of Michigan, Henry Ford Health System, and Detroit Medical Center are all based in Detroit.

In 2020 the city of Detroit announced the Detroit Housing for the Future Fund. The aim of this new initiative was to preserve affordable housing in the city. The program had a goal of raising $75 million. So far, $48 million has been raised. Earlier this month, PNC Bank committed $7.5 million to the Future Fund. This key investment will allocated to support developments in need of gap financing, according to the Mayor's office. With real estate prices booming throughout the city, the need for affordable housing is at an all-time high. Many neighborhoods especially in the city center such as Midtown and Corktown are witnessing soaring property values. This has priced out many lifelong Detroiters who can no longer afford the rising rental prices and home values.

The housing market continues its upward trajectory even as the COVID-19 pandemic ravages on in the United States. Here in Detroit, the city is witnessing two particular trends in the housing market: low inventory and increasing rents. According to Rent.com, Metro Detroiters are witnessing a 23% increase in rents since the beginning of the pandemic. With skyrocketing demand for quality rentals and not enough inventory, renters are finding it increasingly difficult to secure a new place. Rentals which are listed online are being filled within days of posting. While this is great news for landlords in the city, renters are facing a tough situation.

The coronavirus pandemic continues to ravage the United States, with cases surging in nearly every state. Michigan is no exception and the state's Governor, Gretchen Whitmer, has implemented another 3 week shutdown aimed at slowing the spread of the virus. Despite this grim reality, the real estate market in Metro Detroit continues its bullish run. Property values continue to rise and inventory remains scarce. The historically low interest rates have presented a unique opportunity for both buyers and developers. Development projects are moving forward with full steam despite concerns of a COVID induced economic downturn.

Detroit based real estate developers The Platform and Queen Lillian announced that they are proceeding with the Woodward West project. The $60 million mixed-…

Metro Detroit has been one of the hardest hit areas of the country in the wake of the COVID-19 pandemic. The state of Michigan had over 45,000 confirmed cases and over 4,000 deaths as of May 5th 2020. Although stay-at-home orders and social distancing have flattened the curve, the state is still grappling with the virus. Many states have scaled back restrictions and some states including Texas and Georgia have re-opened their economies. In Michigan, the lifting of restrictions has been gradual. On May 1st Governor Gretchen Whitmer signed an executive order allowing several sectors to reopen including any outdoor work, construction, and real estate activities effective May 7th 2020.

The "Stay Home, Stay Safe" order will remain in effect until May 15th and there is speculation…

The University of Detroit Mercy has announced a major investment into its northwest Detroit campus. Following a successful fundraising campaign that netted $115 million, the private Catholic university plans on beginning construction in the summer of 2020. The school is located near the intersection of McNichols Rd and Livernois Avenue. The area north of the campus is fittingly named the "University District," and features some of the city's grandest homes. Livernois, was once known as "the Avenue of Fashion" because of the numerous clothing stores that lined the street in Detroit's heyday. Today, many new businesses and commercial developments are sprouting up along the road. Just west of Livernois is the popular and less expensive Bagley neighborhood. Bagley was an area that was…

As the world continues to grapple with the COVID-19 pandemic, every facet of our lives has changed. With fear and uncertainty devastating the stock market, investors are looking to invest in real estate for safety and diversity. According to the Wall Street Journal, "A growing number of property investors are preparing for what they believe could be a once-in-a generation opportunity to buy distressed real-estate assets at bargain prices." There could be a rise in foreclosures, as many homeowners will experience job loss. Most housing and economic experts don't expect a housing market crash similar to 2008, but even a small dip in the market could provide an opportunity for investors. Interest rates are very low and even with the current crisis it remains a great time to buy.